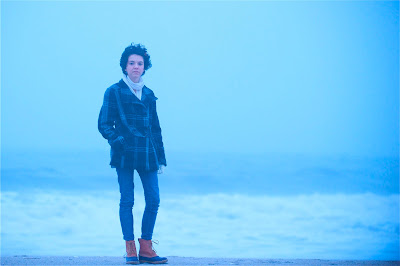 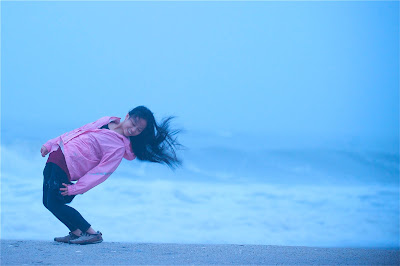 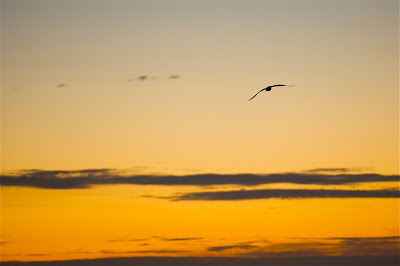 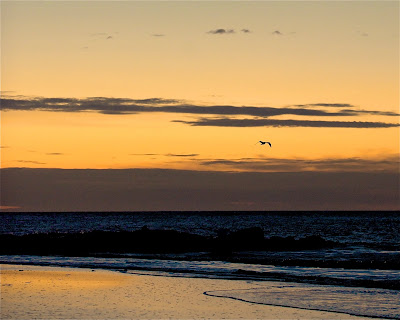 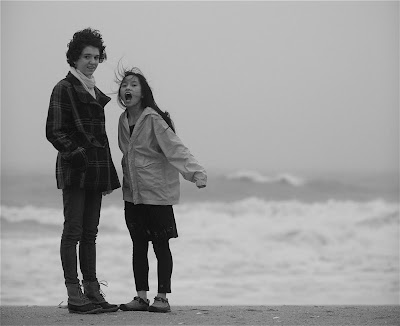 Ken, Yumiko, Yumiko's friend Laura and I took the day off yesterday and headed to the beach for a sleepover at a wonderful old bed and breakfast in Cape May, New Jersey. It rained like crazy the whole three hour ride down, but soon after we got there the rain stopped and Yumiko, Laura and I ran to the beach just before dark and I got a few photos of the two of them. Then I woke up real early this morning and got back to the beach just at surise. Here area a few photos from our adventure.
Posted by Kitty Riley Kono at 10:37 PM 1 comment: 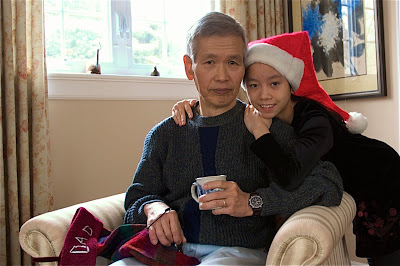 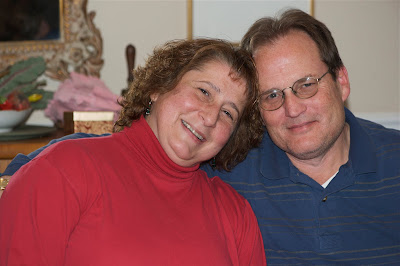 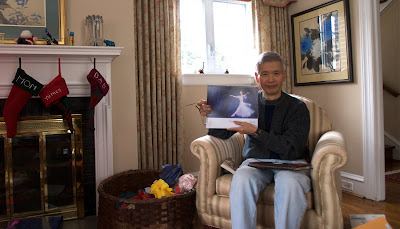 It's Christmas night around 8:00 p.m. The turkey's been carved and put away in the refrigerator. The presents are all unwrapped. My brother Peter and his wife Anna blessed us with their wonderful wit and humor all afternoon and have now gone home. Ken's friend Yutaka was here early and has gone for a few days in Boston. And our dear friend Barb Reid was here too and has also gone home. It's quiet. Ken is reading a book. Yumiko is drawing in her room and I am happy to be back here at the keyboard and NOT COOKING for a few minutes. We had a wonderful Christmas and hope you did too. Here are a few photos.
Posted by Kitty Riley Kono at 7:55 PM No comments:

The Blessings of a Snow Storm 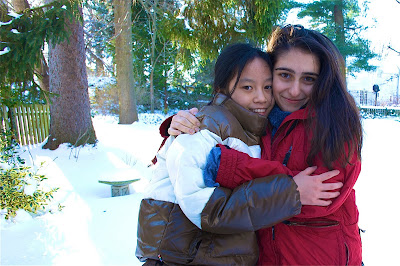 Well, as the U.S.A. knows, we had a whopper of a snow storm over the weekend. More than two feet here at 470 Glenmary Lane. By the middle of the day on Saturday, Yumiko was feeling quite snowed in and just wanted to go out sledding in the midst of the blizzard. She called a bunch of kids, but everybody was busy. Finally one kid said she could play the next day (Sunday) at 10:00. I felt relieved. But the next day at 10:00 the kid's mom called and said she was not yet home from a friend's house and she would call Yumiko when she got home at 11. 11 came and no call. Poor Yumiko. So, I suggested we try her friend Sonia who lives a little distance away. I would brave the snow and go pick Sonia up and take the kids up to the best sledding hill in our neighborhood. Sonya was game. We flew out the door, the roads were pretty clear, so we drove over to Sonya's whose steep driveway was still just a drift. Sonya slogged through her back yard, put her big sled in the trunk and we headed to the hill.
When we got through the woods to the road leading up to the top of the hill, I could see this might be a challenge, but I was determined. So I took a deep breath and started up the winding totally iced road. The wheels turned and turned and churned, the car weaved back and forth, we could smell the burning rubber, but somehow, we made it almost to the top of the road. Then the car would go no further. I told the kids to jump out, grab the sleds and pray for me as I tried to back the car down the winding ice sheet. They waved good bye and I began the slow backing down the hill.
I opened the door and kept my hand on the wheel and looked backwards. I was pretty impressed as I weaved down and somehow kept the car on the road. But after a few minutes I heard a beep and saw a big SUV right in front of me. The man who was driving jumped out of his car and came over to me and said I was a bit crazy to be going down that icy mountain that way and suggested he get in the car and do it for me. He told me to go get in the SUV with his wife.
I was more than happy to do it. (Dear readers, let me tell you, I looked a bit like a crazy woman, with wild hair and Ken's jacket, and just a little panic stricken.) But I got in the SUV and there in the back where three little teeny tots with red cheeks who had been sledding all morning. The mom was just as nice as can be and didn't let on that she thought I was a crazy lady.
The man driving my car, found a way to turn it around without getting stuck. He then pointed it down the hill and slowly we got to the bottom. I thanked them all profusely, jumped back in the old Ultima and made it home safe and sound.
A few hours later, Yumiko called from the cell phone saying she and Sonia had walked almost all the way home, but could I come pick them up as they were freezing cold. I jumped back into the old Ultima, found them in a snow bank on Matson Ford Road, brought them home to hot chocolate with marshmellows, peanut butter and jelly sandwiches and a good movie on the T.V.
Ahhhh..... The blessings of a snow storm.
Posted by Kitty Riley Kono at 8:07 AM No comments: 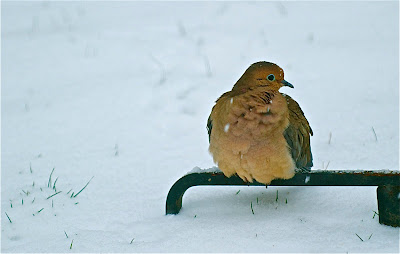 It's still snowing. Here's a little dove from yesterday. I'll post more later after I get out there today. Oh boy....
Posted by Kitty Riley Kono at 6:51 AM 1 comment:

Hey It's Snowing Outside!!! 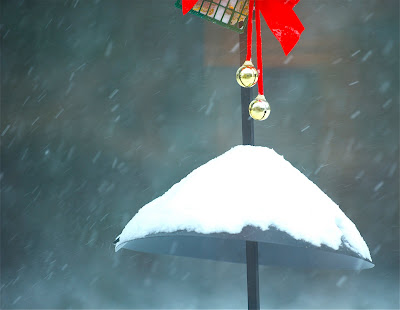 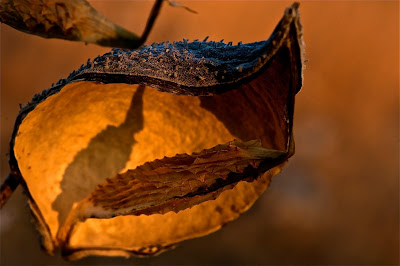 Who would think the lowly milkweed could be a thing of beauty. Well today, I got a message from the good people at www.betterphoto.com informing me that my "Milkweed Husk at Dusk" is a finalist in the November Photo contest. All those walks among the deer ticks at Valley Forge are paying off.
Posted by Kitty Riley Kono at 5:30 PM No comments: 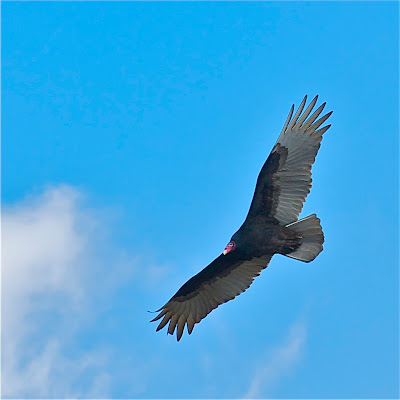 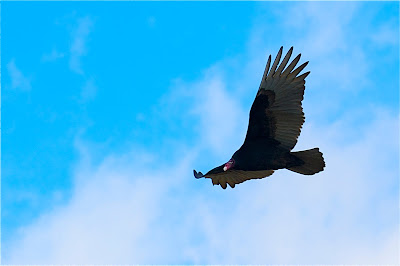 I was back at Valley Forge this morning walking the fields, taking pictures of milkweed. I took way too many, but the light was too bright and the day was too clear to get anything good. However, as I was getting back into the car I looked up in the sky and there were a few turkey vultures soaring overhead. Here are the best I got.
Posted by Kitty Riley Kono at 7:22 PM 1 comment:

Snow and the Nutcracker 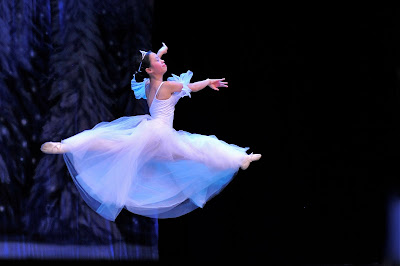 Yesterday it snowed like crazy here in St. Davids. At the same time, Yumiko was dancing as a beautiful snowflake in the Nutcracker at St. Joe's University. Click on the girl to check out that extension.
Posted by Kitty Riley Kono at 11:28 AM No comments: 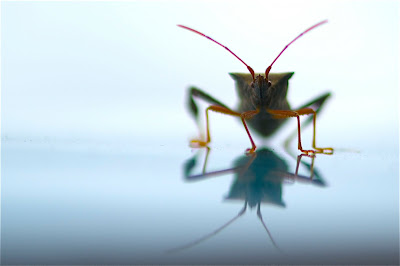 Guess what? My photo entitled "Stinkbug on My Car" won first place from the Masterpiece BetterPhoto contest!! Wu Huuuuu! The contest has been over for more than a month, but the winners were just announced today. There were over 200 photographs entered and to tell you the truth, I thought many of them had a much better chance of winning. But what the hey, I am very happy. Now, the question all of you may be asking - What is the big prize for winning first place? You guessed it -- the pleasure of winning. Ahhhh.... Life is good.
Posted by Kitty Riley Kono at 8:10 PM 3 comments: