The Chicks have Arrived!! 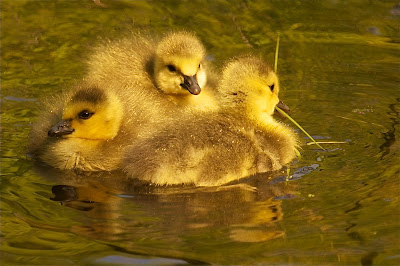 Found these little balls of fluff today on the pond at Eastern. They couldn't be more than a few days old.
Posted by Kitty Riley Kono at 9:38 PM No comments: 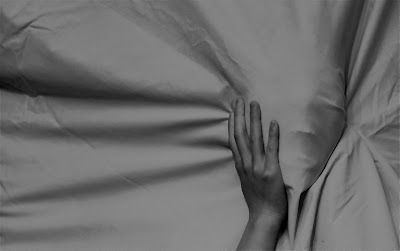 This week's assignment was to take surrealist pictures. Guess who this is?
Posted by Kitty Riley Kono at 9:47 PM 1 comment: 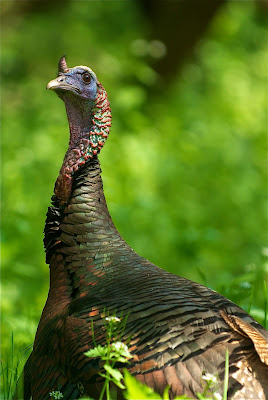 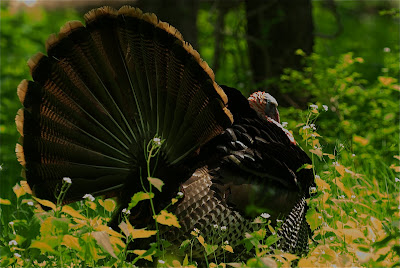 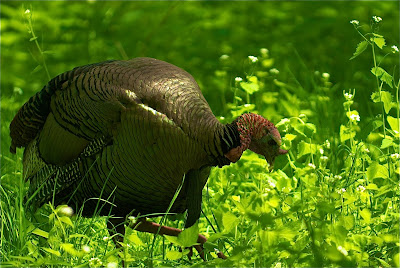 My photography teacher told me I really did not need to spend the big bucks on a 400mm lens. He said if I put my 70mm - 200mm lens on my old camera (with a smaller sensor) and added a 2X converter, I would get the reach I am looking for. O.K., so I thought I did what he said and I headed out yesterday morning back to the John Heinz Nature Preserve to see if I could photograph the Eagles. Well, as you all may know, my brain is a little fuzzy, and I forgot to include the 2X converter. I was back to square one with no ability to take pictures of anything too far away. Bummed out, but not deterred, I walked the trails taking pictures of frogs and swallows and caterpillars. I finally decided it was time to come home - when what did I see from the corner of my eye - but a large fan of brown feathers in the brush. I looked a little closer and there was a WILD Turkey. Oh, heaven had arrived. I stopped in my tracks and just slowly crept ever forward. The turkey (as I realized after a little while) was not terribly bright. I could get pretty close and the turkey was not aware that I was anything but a tripod and a red rain jacket. After a while, I think the turkey sort of developed a crush on me or the moving tripod because he was always raising his tail feathers and sort of puffing all up. Here are a few shots of my new friend standing proud, showing me his tail feathers, and relaxed. Click on the photo for the full effect.
Posted by Kitty Riley Kono at 8:44 PM No comments: 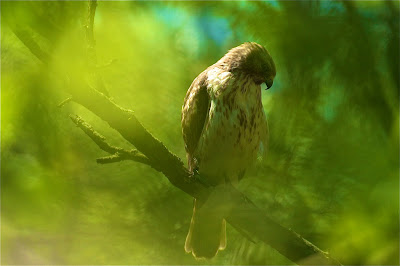 I took my first trip to the John Heinz National Wildlife Rescue Park today and Ohhhhhh I fell in love. There were hawks and swallows and beavers and wild turkeys and frogs. I was in my element, but need to go back when the light is a little less harsh.
Posted by Kitty Riley Kono at 8:43 PM No comments: 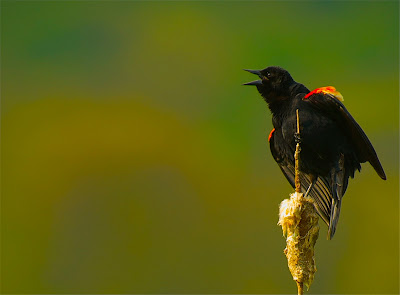 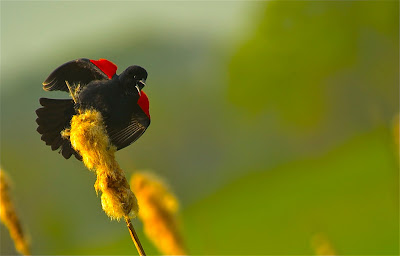 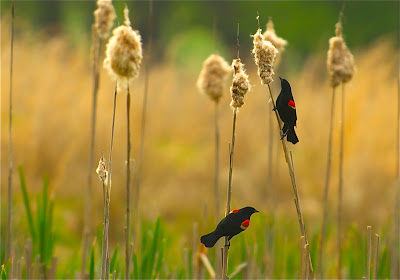 I was looking for lions, tigers and bears yesterday at Valley Forge, but instead found two red wing blackbirds on a date in the marshes. Here they are romancing eachother.
Posted by Kitty Riley Kono at 8:25 AM No comments: 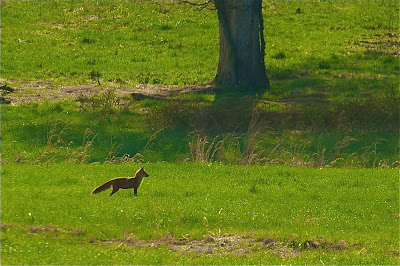 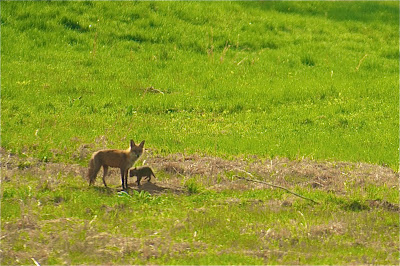 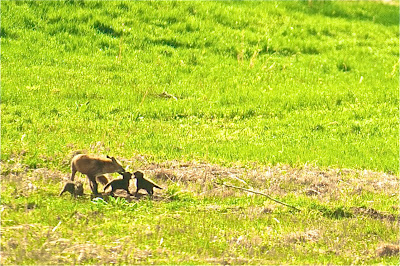 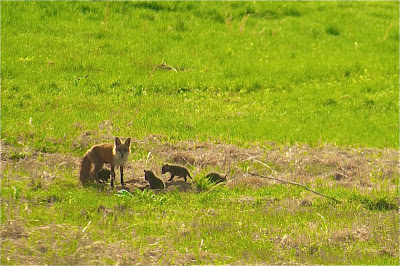 I was trying to get good photos of the starlings at Valley Forge, but they were not cooperating. As soon as I got close they would all fly away. I got discouraged and decided to walk up over the ridge and see what was on the other side. And what to my wandering eyes did I see?? But a beautiful mother fox and her four little cubs. I couldn't get very close as she had already spotted me. But....If I had that 400mm lens I've been dreaming about - and maybe put on a 2X extender, these photos would be a lot more fun. In the meantime, just see how cute these guys are.
Posted by Kitty Riley Kono at 2:59 PM 4 comments: 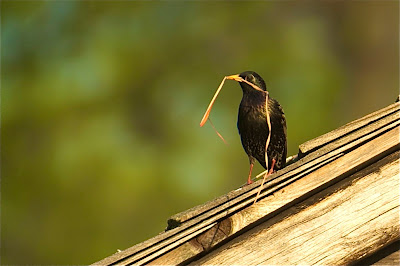 Posted by Kitty Riley Kono at 10:18 PM No comments:

Dogwood in the Forrest 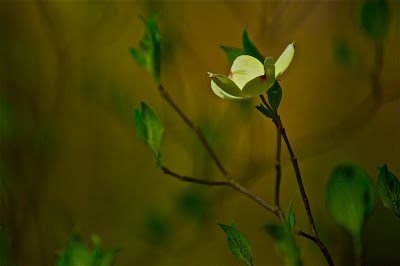 Posted by Kitty Riley Kono at 12:14 PM No comments: 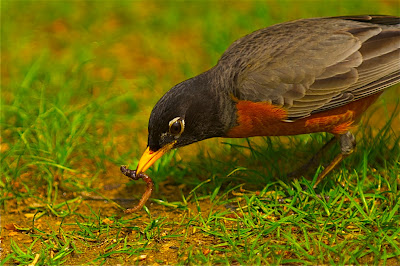 Posted by Kitty Riley Kono at 12:08 PM No comments:

Film Noir - Or Was I Just Having a Bad Day? 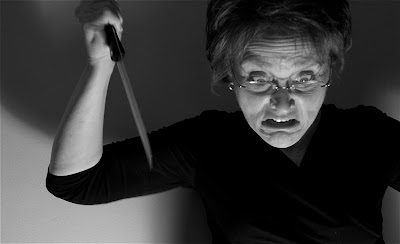 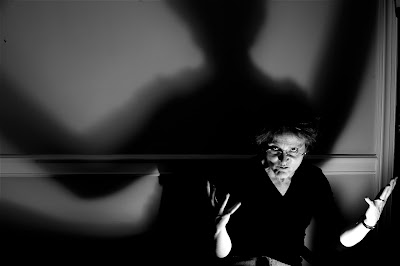 For my class this week we had to shoot "Film Noir" in black and white. This is supposed to be a scene from a horror movie with lots of shadows and harsh light. I decided to do my best "Mommy Dearest" imitation.
Posted by Kitty Riley Kono at 10:15 PM 2 comments:

Labels: Film Noir, Film Noir - Or Was I Just Having a Bad Day, Mommy Dearest 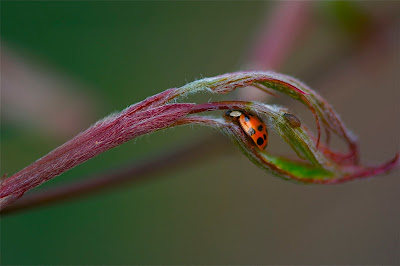 Posted by Kitty Riley Kono at 2:59 PM No comments:

Click on Fly to See His Yellow Bubble Gum 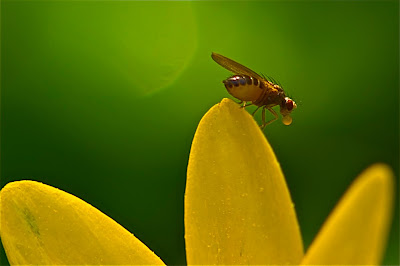 Posted by Kitty Riley Kono at 5:10 PM No comments: 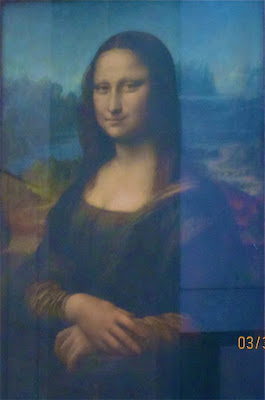 Ken begged me not to tell this story, but I said it was too good to go to waste.
So there we were. We had just finished a wonderful lunch at an Italian restaurant one block from the Louvre. We were all so proud of ourselves. Earlier that morning, we'd gotten to the museum and through the crowds basically without a hitch. It was too hard for Ken to walk, so we'd gotten a wheelchair and the audio tour and spent the entire morning just lovingly going through room after room of one magnificent masterpiece after another. We even got to see the Mona Lisa and Yumiko wedged her way up to the front of the crowd and took her picture. It was raining hard after our museum tour. We gave up the wheelchair and walked the short distance down one Paris block to our Italian restaurant.
After lunch, I told Ken and Yumiko to wait on the corner and I would run through the rain and find a taxi. I tried my darnedest to flag one down, but have learned since few taxis will stop unless you go to a taxi stand. I found a taxi stand with many taxi's but no drivers. I went into a local shop and asked where I could find a functioning taxi and the proprietor said I needed to go around the block to the front of the hotel. At the front of the hotel there were no taxis. Again, I asked where are the taxis. Another person pointed down another street and said the taxi stand was there. The rain was still coming down. My hair looked like Bethovan's on a bad day, but I finally found the taxis and jumped in the first one. That's when the trouble began. I thought if the taxi turned right and then turned right again we would come to the little road where the Italian restaurant was. He turned right and right - but no Italian restaurant and no Ken or Yumiko in sight. The taxi driver was in no mood for a dipsy, bad haired American lady. I quickly realized I had no idea where we were, so I told the taxi to stop and I would be happy to pay him. He said it would be six euros!! I had only a 50 Euro note and about 2.65 Euros in small change. He was not happy to have to make the big change, so he took my 2.65 and basically kicked me out of the cab. There I was in the middle of Paris, rain pouring down, a million little streets to chose from, no cell phone and no idea which way to turn. I finally found a sign for the Louvre, and somehow after backtracking, by shear luck I got back to the Italian restaurant and there was poor wet Ken, eyes glazed over wondering where the H I had been. I explained my predicament. He said he had sent Yumiko out to search for me. I told him I would find her and then go back to the taxi stand and get another cab. I headed back up the street, this time with confidence. I knew where the taxi stand was and I was sure I could get back to Ken and Yumiko with no problem this time. I found Yumiko about a block up the street and told her to go back and wait with Ken. I quickly made it to the taxi stand and got in the first one at the head of the line. This taxi driver was much nicer than the last one. I told him exactly how to get back to the little Italian restaurant and in no time we were there. BUT NO KEN and NO YUMIKO. What happened!!?? I asked if the driver could just wait for a minute. He was happy to oblige and parked the cab on the corner. I ran into the Italian Restaurant, but no one had seen Ken or Yumiko. I looked down one block and down another, but nothing. The taxi driver said he would wait for a little while, but five minutes went by and no show. Finally I told the driver, I would pay him, but he shouldn't wait any longer. He wouldn't take any money. (Thankfully because all I had was that 50 Euro note.) It had finally stopped raining. I didn't know what to do. Was Ken so angry with me that he just found his own cab and he and Yumiko went back to the hotel without me? I couldn't believe it. I waited a good 15 minutes. Finally a taxi with another passenger stopped right in front of me. The passenger got out and I asked if the taxi could take me to my hotel. He said he could not do that. I would need to go back to the taxi stand. Ugh.... I felt like crying. I was so disheartened. I started walking back up the block in the direction of the taxi stand - and lo and behold there is Ken. He looked as bad as I did. I said, "What happenned? Why are you here and not in front of the Italian Restaurant?" He said it was too cold there and after the rain stopped, he wanted to stand in the sun. Oh....... He said he had sent Yumiko out for another search for her mother. I could see Yumiko running towards us and she could see that we were both a bit upset. I said to Ken I would go a third time to get the taxi, but he said - NO WAY, we will all go together. And go together we did. We got to the taxi stand, jumped in the first one and all made it back home to our little hotel safe and sound.
Posted by Kitty Riley Kono at 7:30 PM 1 comment: