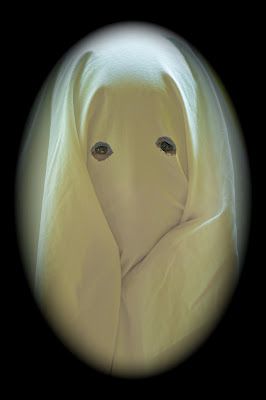 It's Halloween. Guess who this is.
Posted by Kitty Riley Kono at 7:03 PM 4 comments:

Little Bug on a Star 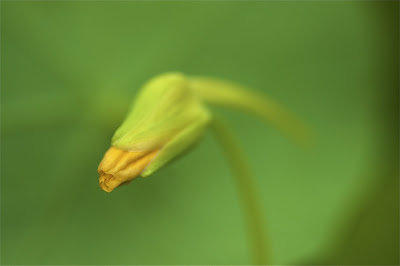 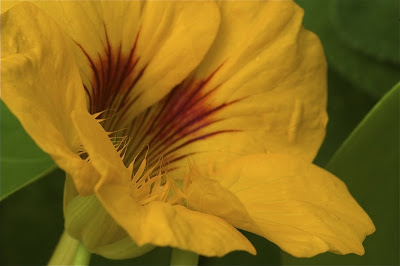 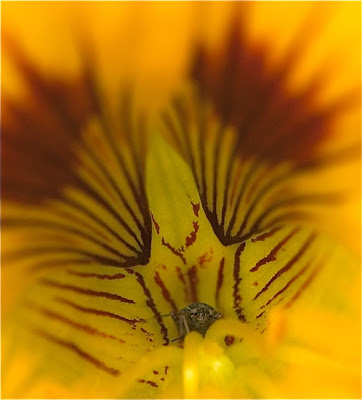 Today was the day to turn over the vegetable garden and rake the leaves. Before starting, I needed to pull all the beautiful wild nasturtium that had grown throughout the garden. As I pulled the first few plants, I just had to get my camera and take a few last shots of the little orange blossoms. Got my camera, took a few pictures, then finished the job.
After that, I came in and downloaded the photos. In one photo, in the center of a nasturtium bud, there to my absolute delight was a tiny little bug hiding way back behind the stamen, sitting on a star. He looked like a little frightened frog. I never even noticed him when I took the photo. Check it out. Click on him to see a little better. Isn't nature amazing?
Posted by Kitty Riley Kono at 2:34 PM 1 comment:

Centipedes, Slugs, and a Sniffing Deer 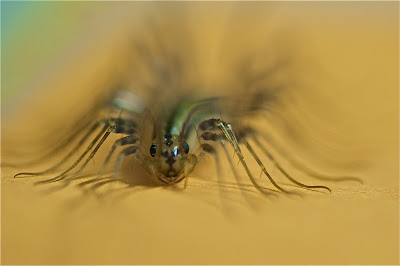 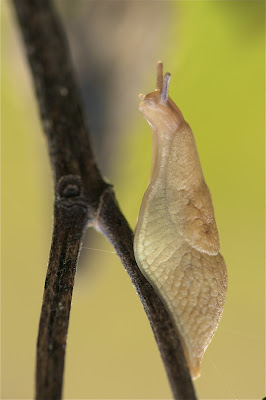 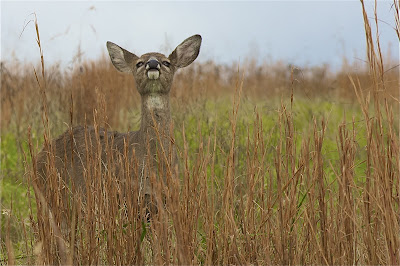 I've been having fun lately taking photos of centipedes in the basement, slugs in the rain and a wonderful little deer sniffing the air. Remember - click on the photo to get up close and personal. Be brave.....
Posted by Kitty Riley Kono at 9:04 PM No comments: 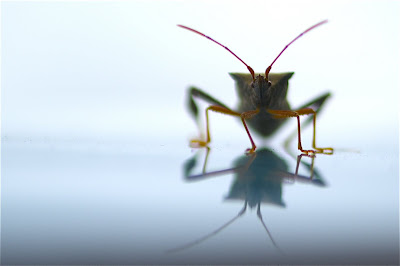 A few weeks ago I mentioned I had gone to my local photography club and showed a few of my recent photographs. The club members were less than impressed. I included one photograph - a stink bug that had landed on our car while Ken and I were parked in Valley Forge Park. Well, after I posted that story, a few of you wrote saying you truly liked the stink bug. Sylvia, my artist friend from Japan said she was going to use him as a prototype for a children's story she is writing and illustrating. And Maryann said not to let the club members get me down. She suggested I enter the Stink Bug into a contest. WELL.... it just so happens that my on-line photography school - BetterPhoto.com has a masterpiece contest each month. This month the theme is reflections and shadows. I entered my stink bug about two weeks ago. This morning I checked the results and lo and behold, Mr. Stinky is in FIRST PLACE! Now, of course, all this could go down hill quickly as the contest is not over until the end of October. In the meantime, I am riding high and have a new appreciation for all bugs and all dear friends who love bugs.
Posted by Kitty Riley Kono at 9:15 AM 8 comments:

Beautiful Spider in the Garden 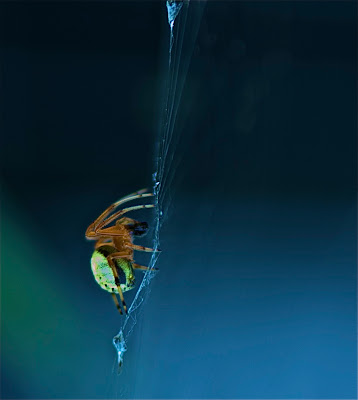 I'm taking a new photo class this month on macro photography. I was out in the garden this morning and this afternoon. I took a lot of flower pictures, but what I loved most was this big fat spider. I only got one shot of him before he streaked back to his hiding place. Tomorrow I will try to find him again, but in the meantime, take a look and click on him to see how cool he is.
Posted by Kitty Riley Kono at 10:25 PM 1 comment: 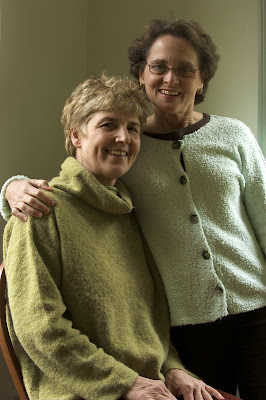 The last time I saw Carol Scafuro was eleven years ago - before Yumiko came home. She flew in this weekend from Vermont and we picked up right where we left off. So wonderful to see and be with this great, great lady. She cooked us the best spinach lasagna and broccoli rabe known to mankind. Ken is considering divorce and remarying Carol after such a fabulous dinner.
Posted by Kitty Riley Kono at 10:38 PM 1 comment:

Miracle in the Driveway 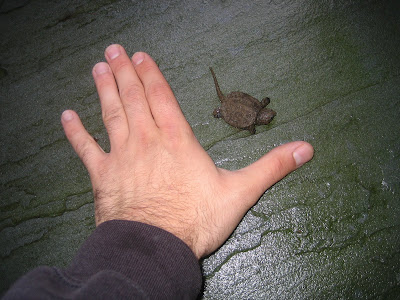 Back in early June while we were still in Tokyo we got an e-mail from our next door neighbor, Sharon Garcia. She told us a great big snapping turtle had walked up our shared driveway, dug a deep hole in her garden and laid about 20 eggs. The whole neighborhood stood around and watched while this was happening. They even took a video of the egg laying and sent it to us. When we got home at the end of June we found Sharon had placed little pink flags all around the spot where the eggs were laid. For the last three months, we have walked past those pink flags and wondered if the eggs would ever hatch. Sharon got a little impatient and even planted a few mums on the spot. Well, as nature would have it, this past weekend while I was in Washington, Ken and our friend Millie found a little brown lump moving up our walk towards our side door. Millie picked it up and asked Ken what it could be. Lo and behold it was a little baby snapping turtle. Sharon's son Andres found a second one also in the driveway. Both babies were taken down to the stream at the end of our road where their mom came from. Now, we're all on the look out for the rest of the crew. Here's a picture of that little critter next to Andres' hand.
Posted by Kitty Riley Kono at 7:47 PM 1 comment: 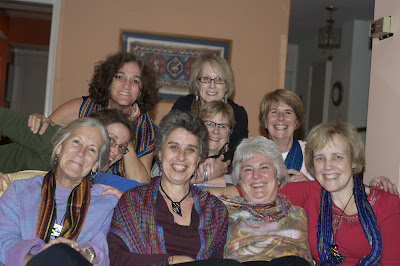 I got together with my wonderful eight best friends from college this past weekend in Washington, D.C. Oh, what a time we had. Can't believe it has been 35 years since we graduated!!!
Posted by Kitty Riley Kono at 10:07 PM 2 comments:

Nobody Liked My Pictures 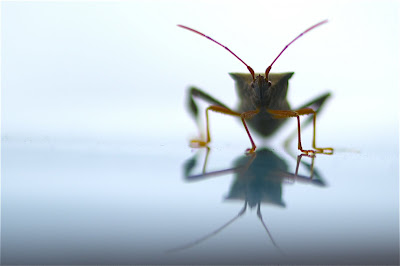 I went to my second ever Camera Club meeting tonight. The meeting was held in an old Main Line mansion that's been converted into a night school. I brought a little "jump drive" with a few of my favorite recent photos to show to the class. There were quite a few other budding photographers there who got to show their work before mine. Everybody's stuff was pretty darn good - beautiful photos of the Grand Canal in Venice and the Matterhorn rising out of the Swiss Alps and other stuff like that. With all that grandeur, I got a little nervous before my turn came up.
First picture I showed was of a deer in Valley Forge Park. Nobody was crazy about the deer and after looking at it on the screen, I wasn't so crazy about it either. Second up was a butterfly (that I thought was pretty good). Again, the reaction was a little ho hum - another butterfly picture.
Finally, my last shot of the evening was of a stink bug that had landed on our car when Ken and I had parked for a minute in a parking lot at Valley Forge. I LOVE this photo. But somebody asked, "Is that a Stink Bug?" I said yes and the instructor quickly moved onto the next student's portfolio.
Maybe this MainLine camera club just might not be the ticket for me. Ah heck, I'll give it one more try.
Posted by Kitty Riley Kono at 9:17 PM 6 comments: 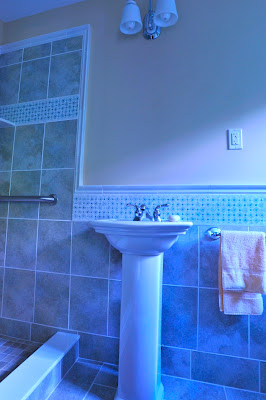 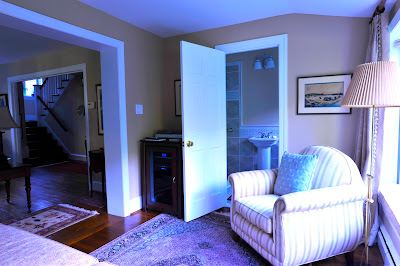 When we got home from Japan in July, we decided it was about time we had a bathroom on the first floor. Ken went to work and put pen to paper. He designed a full bathroom with a nice big shower and a pretty window. The location is right where the piano was in the small room off of our living room. We hired our friend Bob the Builder. He worked like a madman and put the whole thing together beautifully - fully tiled - in 16 days. Shower door still needs to come, but other than that, it looks great and we are ready to have a new bathroom party.
Here are a few pictures from different angles.
Posted by Kitty Riley Kono at 11:19 PM 2 comments: