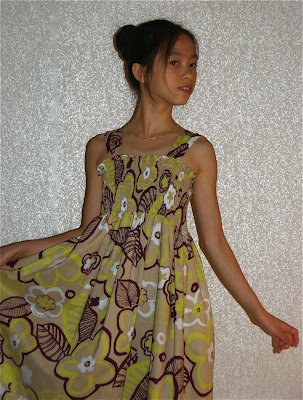 It was pouring rain (again) at 6:30 last night when Yumiko left to go to the graduation dance.  She looked beautiful - even if I do have "parental stupidity" as my brother in-law says.  She wore her new dress and a pretty silk shaw.  Her hair was up with a thin gold necklace around her neck.  I walked her to the taxi with umbrellas blowing.  She jumped in and sped off to the dance.
Ken and I ordered a pizza and then just anxiously waited.  Yumiko was supposed to call around 9:00 when the dance was over, but no call.  I fell asleep on the couch until about 9:45 when Ken woke me up and said "She's home!"
SHE HAD A GREAT TIME!!  In fact a boy asked her to dance.  This boy is about six feet tall - Yumiko is not even five feet.  She has talked about him before and said he often teased her at school.  But this night, he came up to her and said, "Yumiko, would you like to dance?"  She was so surprised and shocked, she just looked up at him skeptically and said, "Maybe."  He looked down at her and said, "All you have to say, Yumiko, is yes."  She took a deep breath and said, "Yes."  They really didn't dance in the classic sense.  Just sort of swayed back and forth in place with her head pressed against his chest for about two minutes until the song was over.  He then thanked her for the dance, and that was it.
She was happy as a clam when she came home and Ken and I were two of the most relieved parents in the world.
Posted by Kitty Riley Kono at 6:36 PM