A few weeks ago we learned from Ken's first wife Barbara of a new therapy for Parkinson's Disease - Boxing!!  It seems that the exercise of intense punching improves physical performance, stimulates the brain and can even reduce the amount of medicine needed.  We decided - what the heck - let's go for it.  We did a google search and found "Washington Boxing Academy" around the corner near King of Prussia.  We sent a message to the coach and owner - Mr. Arden Washington.  He wrote back and said "Come on over and let's take a look at this Ken Kono."  We've been back three times and each time we come away just a little more amazed and up beat.  Mr. Washington could not be more inspiring or encouraging.  And Ken is having more fun than he has had in a year.  Here's a photo of Ken  and Mr. Washington during their first boxing session.  We've scheduled to go twice a week for the foreseeable future.  Soon that man will be walking on the moon. 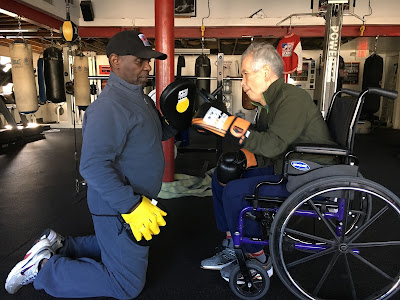