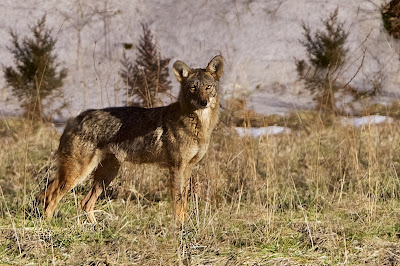 A few weeks ago I saw a fleeting glimpse of a coyote in Valley Forge. Then a few days ago after it snowed, I saw two coyotes chasing each other far off in the distance.  Then the day before yesterday I saw my two coyotes in the field and was able to get reasonably close to get a photo.  Today... Oh today.... I went to Valley Forge early hoping I would get lucky again.  But as I entered the big field I saw two other photographers waiting in the brush hoping for the coyote and I knew it 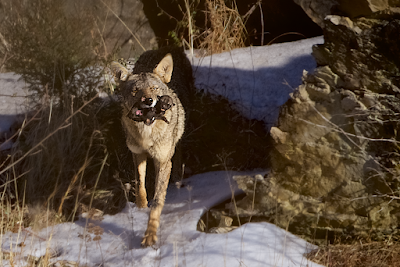 was not my time.  So I doubled back and decided to take a different path. As I was walking along the side of the woods a truck with a wonderful park employee came driving by on the field road.  He stopped and we had a great conversation about the park and its beauty and the wonderful wildlife.  I asked him if he knew where the coyotes were and he said yes....  And he showed me photos of coyotes he had taken with his cell phone.  I was amazed.  I came back to Valley Forge late in the afternoon today.  I walked up County Line Road and was stopped by a park employee saying I was not allowed on the road because of the asbestos removal and I had better get off the road immediately.  I held my tongue and politely asked if it were O.K. if I walked in the field. He said yes.  We bid goodbye and I walked in the field until I came to the place where the other much nicer park employee told me the coyote den was.  I crouched on a ledge overlooking the den with a lot of weeds in my face.  I waited a long time, but finally I saw a little movement.  There was the beautiful coyote and she was transporting her brand new little babies from one part of the location to another.  I took lots of photographs - all a little fuzzy, but truly amazing none the less.  After she transported the second baby and knowing I was there I decided to fold up my equipment and head on home and rejoice in the beauty of the world. 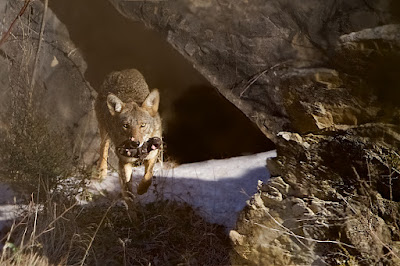