When I got to the pools at Pawling Farm I noticed the toads immediately.  Everywhere I walked little tiny toads were underfoot.  Thousands and thousands and thousands of them.  Just a fingernail in length and with so much energy and determination.  I knew I had to get a good picture.  But they were so small and so fast and so well camouflaged.  I found a bunch of buttercups.  Sat down and tried and tried to catch a little toad and put him on the buttercup.  They were all there, but it was so hard.  I almost gave up.  They were so fast.  They had no interest in the buttercup.  Finally I took a buttercup and dunked it in the water thinking a toad might want a little drink.  Whatever, the next toad stayed around long enough for a picture.  Here he is.. 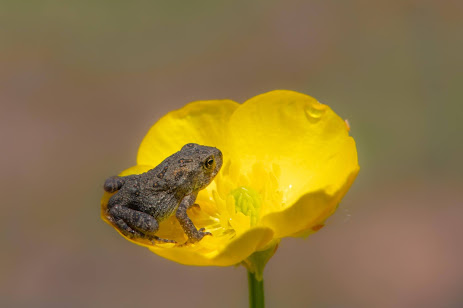