Tom and I were coming back from Ludwig's Corner where we had gotten a pizza. Tom wanted to get the pepperoni and cheese and I wanted to get the feta and olives and pine nuts. I won. So as we are headed home to bake the pizza there were two beautiful red tailed hawks on the dead branches of a tree. Perfect pose, but no camera. Tom drove home quickly. I ran in, put the pizza on the counter. Grabbed my camera, got back in the car and Tom sped back to the hawks. Could have been at least five minutes and they were still there!! I asked Tom to open the top of the car where there is a window, but neither of us had done this yet as it is a new car. While opening the window we accidentally pushed the emergency button which calls the 911 people. The hawks were still there!! Finally got the 911 people off the phone. I jumped out of the car and took about 100 photographs. None any good. But here's one of one of the hawks as she flew over our heads.

The feta pizza was really good. 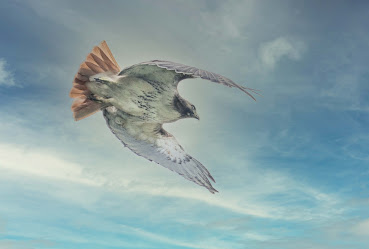