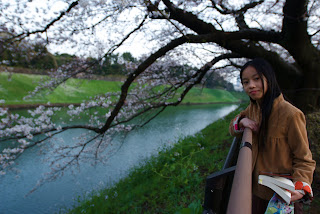 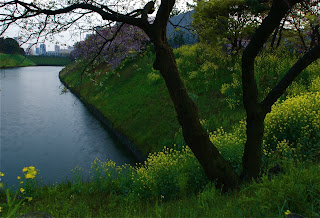 It's early Saturday morning, April 4.  (Another sleep-over tonight for Yumiko.  For those of you who have been following that saga,  I'll report on that tomorrow.)
Ken's brother Tokuya San is in the hospital.  He had elective surgery on a hernia about three days ago.  Here in Japan if you have even a simple operation you stay in the hospital for a long time - in Tokuya's case he will be there for a full week.  So yesterday, Takae San, Ken and I drove out to visit Tokuya.  The hospital is in another prefecture about an hour from Tokyo.  Tokuya looked great.  He was up and about and had great color.  He had a private room with a window looking out on beautiful spring trees that were in full bloom.
It was a long ride to the hospital and we would have a long ride back home so Takae San suggested that Ken and I visit the bathroom before we take off back home.  As we walked to the bathroom Ken said he wasn't sure if my side was going to be an "Eastern" or "Western" style.  I told him no matter what, it was no problem.  When I got into the little stall, I was thrilled to see that it was western.  And not only western, it had all kinds of buttons.  Buttons for washing and drying and doing all kinds of things.  Anyway, when I was finished I pushed the button that I thought was the flush.  But just after I pushed it, I realized it was not the flush.  It was blinking red.  A few seconds later a nurse came rushing into the bathroom all in a fluster.  I had pushed the panic button.
Anyway, we got back home late in the afternoon.  I then met Yumiko who was waiting for me after school in a little Indian restaurant.  We ordered some great take-out curry, rushed home and told Ken we would be back to have dinner a little later.  Then the two of us went back out to photograph the cherry blossoms one more time at the Honzoman Gate to the Imperial Palace.  People were everywhere.  It is a full celebration here when the cherry blossoms are in bloom.  People putting blankets down on the sidewalks and having dinner and just partying. The spring colors are so beautiful.  Here are a few shots.
Posted by Kitty Riley Kono at 4:51 PM