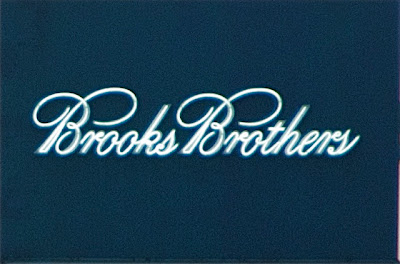 Ken and I have had a wonderfully relaxed time in terms of dressing while here in Tokyo.  In fact, each time we go out walking I always feel as if we are the MOST relaxed looking of anyone in all of Japan.  In other words, we have worn the same jeans and shirts and blouses since we've been here.  Add to that the grass stains on my knees from all the  kneeling to get the bug photos and you can just imagine how relaxed we look especially compared to the impeccably dressed Japanese.
Now, here's the point of this story.  In late June, just before we come home, Ken's sister will be participating in a very special tea ceremony where she will be host to the top grand master of all the grand masters of the tea ceremony in Japan.  And we Kono's have been invited to come to this event.  Although we didn't bring many good clothes with us, what we did bring, we shipped home a few days ago.  So that means we needed to go shopping for some new duds.
Well, it just so happens that Brooks Brothers is just a few blocks from our apartment.  This morning at 11:00,  Ken and I ventured out for his shopping spree to Brooks Brothers.  We got there in our regular attire, looking rather worn, but happy.  Nobody in the store at first seemed to want to wait on us.  Not sure if they thought we were street people or not.  But finally I flagged down a rather gentle soul who very graciously led us into a private room where he could show us some nice jackets and slacks for Ken.
Now, dear readers, if you know my Ken, you know that he, at times HATES to part with a dollar, but his loving wife insisted that he be ABUNDANT and he ended up with two beautiful jackets - one sort of a tan cream color and the other a nice light blue.  And a great pair of slate grey slacks and a good button down pin striped shirt.  Oh it was such fun.
Then our good salesman led us to two very cushy stools in front of a high table where we could sit while he totaled up our bill.  He brought us each a bottle of chilled Perrier and wrote up a separate bill for each of our purchases.  We felt like royalty.
Then, Ken got out the United Airlines Visa card to pay for all this stuff.  For every dollar we spend, we get a free mile on our mileage plus account.  Oh those Kono's - we do know how to squeeze the dollar.  Our good salesman smiled and took Ken's visa card and we sipped our Perrier.  He was gone for sometime, and then came back to us rather sheepishly and told us that the visa card would not go through.
I was horrified, but we both realized the credit card company often puts a stop on large purchases from outside the U.S. because they could be purchases on a stolen card.  We tried to explain this to our good salesman.  He just smiled and said, "Of course."  Then I pulled out my American Express card and suggested he try that.  He was again gone for a long time and Ken and I just huddled together hoping and praying the American Express would go through and Hallelujah, it did.
The good salesman told us that Ken's new clothes would be tailored and ready in about one week, so we got up and we were on our way.  But as we approached the front door, the skies opened and it began to pour.  We did not bring an umbrella.  But again, our good salesman went to the umbrella stand, picked up a brand new umbrella and handed it to us and said it was on the house.
We opened the umbrella and stepped out into the pouring rain.  Oh, life in Tokyo.
Posted by Kitty Riley Kono at 5:52 AM