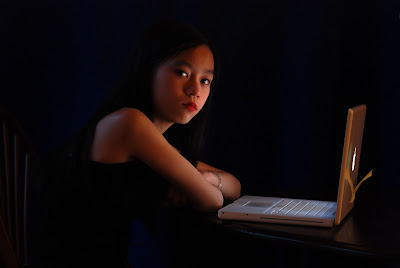 Oh, what a time we had on Sunday.  It was about 10:30 a.m.  Yumiko and I were both working on our computers.  Yumiko asked me to take a look at her screen.  She had been experimenting by taking the software icons off her "docking station" and putting them somewhere else on her computer so her screen looked completely empty.  She thought it looked so cool and wanted to show me.  I thought that might not be such a good idea and suggested that she put the icons back where they were.  In the process she mistakenly put the "PowerPoint" icon into the "iPhoto" icon and that's when the trouble began.
The "iPhoto" started extracting the images in "PowerPoint" and wouldn't stop.  Yumiko was panicking.  How could she stop it!  I suggested she cancel out and turn off the computer.  My way of fixing computer problems is to shut down and start up.  Well she cancelled out, turned the computer off and on again.  But when she turned it back on and tried to access "PowerPoint" it said "not working" or something like that.  She continued to try, but no luck.  She was distraught.  Yumiko has made many PowerPoint presentations - not for school - but for fun - using her own animation.  And if she could not get the PowerPoint to work, it would be a tragedy.  Life as we know it would be over.  Yumiko never cries, but she was crying now.
It was about 11:00.  Ballet practice begins at 1:00.  I knew where the Apple Computer store was - about a two mile walk from our apartment.  I figured if we high tailed it, we could make it there and maybe they could fix it quickly and the problem would be solved.  So, we grabbed our coats and told Ken we would be back by 12:45 in time for a quick bite and then off to ballet.  We walked fast and got to the Apple Store around 11:45.  I didn't realize, but you have to take a number to get technical service at the Apple Store.  The attendant told us it was a busy day and we would not be waited on until 6:20 p.m.  Well, that was an eye opener.  We put our name on the list to come back at 6:20 and high tailed it home, stopping to pick up some rice cakes stuffed with tuna and sour cherry for lunch.
Yumiko had ballet practice from 1:00 - 2:30.  Then she had a special play practice at school from 3:30 - 5:00.  It was going to be a long day.  She got home from play practice about 5:30 and said she wanted to go back to the Apple Store with me to see if they could fix her computer.
We get to the Apple Store at 6:15 and they call our name at the "Genius Bar" about 6:30.  I love those guys at the Genius Bar.  They all look so smart and wear blue t-shirts with the words, "Don't Panic, I'm on it!" emblazoned on the front.  Our genius guy asked us in perfect English what the problem was.  We explained and he began typing all kinds of things into the computer He tried over and over and over again, but nothing worked.  Then he called over an even smarter guy who also tried over and over and over again.  No luck.  Finally the second guy said he thought we would need to reinstall our Microsoft Office Package.  That was the only way.  I told him our disc with the software was at home in the U.S. of A and we would not be going there until July.  He told me there is a thing called intellectual property, and he could not install the store's copy of Microsoft Office.  I would have to buy a new copy.  Well, frugal me asked how much that would cost and he said something like $200.  I could not fathom such a thing at that point and said we would think about it.
Yumiko looked totally spent, depressed and ready to cry again.  Then she asked in a shy voice if they might just take off one of the extra PowerPoint programs that she had created when she was playing with her computer earlier in the day.  An extra PowerPoint?  The second genius guy's eyes lit up and he went back into action.  He turned her computer back on, searched a whole bunch of pages and  found the second PowerPoint.  Then he did a whole bunch more typing and finally - voila - PowerPoint opened!!!  And within power point were all of Yumiko's creations.  Life was good again. We could all breath again.  Happiness rules again.  We were so relieved that I splurged and we took a taxi all the way home.
Posted by Kitty Riley Kono at 7:08 AM