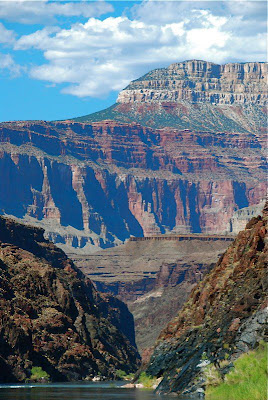 I said in a recent blog that Mr. Takada at the City Hall was probably the nicest person on earth.  I may have been too quick in that judgement as Ken's brother Tokuya San is either tied for first or maybe a close second.  Ken's brother has been so kind to us ever since we got here.  First and foremost, he has graciously allowed all three of us Kono's to live here in his second home in downtown Tokyo for all these months.  It is a wonderful apartment - right in the middle of everything.
I would do anything to repay Tokuya for his kindness and earlier this week, I had a chance.  Tokyua went on a rafting trip with me and my Hollins College girlfriends last summer.  It was a fabulous trip on the Colorado River in the Grand Canyon.  Tokuya who is friends with everyone in Tokyo was asked to give a talk to a group of representatives of the Japan "Mass Media" about his rafting trip experience.  He asked me if I could put together 30 slides or so from the pictures I took on our trip.  He would like to use those slides for his talk.
I thought this was my chance to at least do a good job for him.  But as often happens with me, it was not as simple as just putting a little slide show together.  Here's what happened:
I have a wonderful little MacBook computer that I purchased the day after I retired.  This little marvel has been my salvation for almost two years as I use it everyday to download all of my photos.  The problem is, I have downloaded way too many photos.  A few weeks ago I noticed that my photo files that are stored in electronic albums in my computer were disappearing.  One of the albums that disappeared contained close to 500 photos I took during the rafting trip.  Well, I couldn't tell Tokua San that I lost all the photos and would not be able to make him a slide show.  No way....  Instead, I took my little MacBook back to the Genius Bar at the Apple Computer Store and a young Japanese genius was able to help me.  He couldn't refile all those 500 rafting trip photos, but he at least located them.  I would have to go through them electronically and put them back in a file and then sort out those for the slide show. I could do that.  It may take me days, but I could do that.
I came home yesterday from the Apple store and began sorting through the lost photos and finding the best ones to put a nice little 50 slide - slide show together for Tokyua.  It took me all day, but I got it done before he came home last night and was just putting the slides on a memory stick when he walked in the door.  Tokya San is a very busy, very active man.  He didn't have much time to look at the slide show last night because he was running back out the door to play tennis, so he said he would look at the slide show today just before he would leave to do his presentation to the "Mass Media."
This morning Ken and I needed to go to the doctor's office, but we promised Tokuya San that we would be back in time to show him how to put the "Memory Stick" in the computer so his slide show would go off without a hitch.  We got back from the doctor's office at noon.  Tokya had to leave at 1:00.  When we got back we asked Tokya to pull up a chair to my computer and I would show him how to put the Memory Stick in and how to pull up each of the photographs for his slide show.  I put the Memory Stick in my computer.  The little icon came on the desk top letting us know the computer recognized the Memory Stick.  I clicked on the memory stick icon and there was the "Rafting" file.  All was going well.  I opened the rafting file and there were the 50 slides.  But when I tried to open the first slide it only opened in a "preview" mode.  It was just a tiny picture on my big screen.  I could not get it to go full screen.  So I pulled out the memory stick and put it back in again.  Ken was breathing hard.  Tokyua was just smiling and I was beginning to perspire.  Again, I opened the icon, then tried to open the photo files and still it wouldn't work.  Tried again.  Tried something else.  Began pushing buttons like a crazy person.  Ken finally said he was getting hungry and maybe I should just go ahead and make some lunch.  Tokuya said not to worry.  He was sure somebody at the "Mass Media" event should be able to help him open those photos.  Ugh.....  I was completely mortified, but didn't know what else to do.  Tokuya showed me that he was taking a copy of the book of photos that I made for him, so if there was a problem he could show the book.  Ugh....  Still mortified.
Well, he left at 1:00 and should be back sometime later this evening.  I will let you know if the slide show went on, or if I need to commit harakari.
Posted by Kitty Riley Kono at 12:40 AM