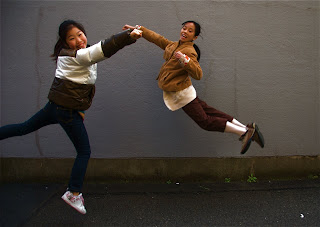 Ken thinks I have "Lazy Brain."   He may be right.  Let me tell you the latest incident why.
Yumiko has been to two sleep-overs since we have been here in Japan.  A sleep-over, for those who may not know, is when you invite a bunch of kids over to your house for a party that lasts all night and into the next day.  Ken has been telling me for months it is our turn to do a sleep-over for Yumiko.  So about two weeks before we left for China, Yumiko and I planned a sleep-over.  She chose four friends to invite.  I sent out an e-mail invitation to the mothers of these four girls giving them the date - April 4 and the time (5:00 p.m.) and asking each kid to bring a sleeping bag.
Just before we left for China, we heard from one mother saying her daughter would not be able to come.  And a second mother wrote back and said her daughter - Emily would love to come. We didn't hear anything from the other two mothers.
So off we went to China.  We had a great time, but lurking in my "Lazy Brain" was the fact that we were going to have a sleep-over the Saturday night after we got back.  This meant I had to clean the apartment from top to bottom, figure out what to have for dinner and breakfast, and make sure Yumiko had good activities planned so the party would be fun.
We got back Thursday night and I went into high gear on Friday.  I did many loads of wash, changed all the sheets, cleaned and dusted, went to the grocery store to get good stuff for the kids to eat.  Yumiko and I trekked to the local department store and bought a scrabble game for the kids to play.  I sent out an e-mail to the two moms that we still had not heard from asking if their kids were coming.  On Saturday morning (yesterday) we still had not heard from the other moms, so we assumed they were not coming.  But that was O.K.  Even having one friend for a sleep-over would be great for Yumiko.  Finally 5:00 came.  Yumiko and I went out to wait on the main street for Emily as she may not know exactly where our apartment is.  5:15 and still no Emily.  5:25 - no Emily.  At 5:30 I told Yumiko we better go in and call and see what happened.  Maybe because of the Spring Break everybody forgot about the sleep-over.  So we went back in and gave Emily's mom a call.  She answered the phone and I asked if Emily was coming to the sleep-over.  Her mom sounded all in a fluster and said, "I thought it was next Saturday." I said "No, it's this Saturday."  Her mom was in more of a fluster and said Emily was at the movies, but she could go get her and bring her over a little later.  Then she said again that she was so sorry, but she really thought it was the next Saturday.  I assured her it was this Saturday, but as I assured her I began to have my doubts.  I told her to hold on for a minute because I just wanted to check the computer.  I brought the phone over to the computer and pulled up the e-mail that I had originally sent to all the mothers.  And there it was.  My original e-mail with the subject:  "Sleep-Over - Saturday April 4."  Ugh...Ken was sitting right across from me.  I apologized profusely over the phone to Emily's mom and told her I must have had a little brain freeze - as the party really was next Saturday.  Emily's mom is just a wonderfully gracious lady.  She said not to worry. Emily was not doing anything that night, so she would bring her over anyway.  I thanked her profusely and hung up the phone.  Ken knew exactly what happened and just shook his head.  My lazy brain struck again.
End of the story is Emily came over a little later and she and Yumiko had a great Saturday night sleep-over. (See photo) And to top it all off, we may just have another sleep-over next Saturday night too.
Posted by Kitty Riley Kono at 7:50 AM