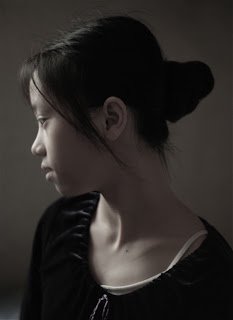 Finding places in Tokyo is no easy feat.  Today, Yumiko needed to go to the ear doctor.  She has had an itchy inner ear problem for a few days and we knew we had to get to the ear doctor or she would go crazy.  (See Photo for the Itchy Ear)  So yesterday when she got home from her ski trip and was still itching her ear I asked Ken if he could find a good ear doctor in our neighborhood.  He found one and made us an appointment for today via the computer.  It so happens that this ear doctor has a computerized system for appointments and he runs through a lot of ears every day.  We were number 55.  His office opens at 9:00 and we were supposed to determine when we should show up for the appointment by multiplying 55 patients by about a three to five minute turn around.  We figured if we were lucky and nothing got backed up our number would come up around 12:00 noon.  I had a little shopping to do early this morning and I got back to our apartment a little late.  Ken was not happy and rushed us out the door at about 11:45 with a little map of where the ear doctor's office was.  The map said we were to go to the Ai Ai Building at Kita Aoyama 2-7-21 near the Starbucks and the Gainmae Train Station.  O.K. we can do this,  I said confidently.  We were late however, and I was afraid if we missed the appointment, we would have to make another one for another day.  So Yumiko and her old Ma took off running down the hill and across the busy streets of Tokyo towards where the map said the doctor's office was.  We got to the street near Starbucks and we started checking all the buildings for 2-7-21.  But there are no numbers on the buildings...  And all the names are in Japanese... So, as time was clicking by and panic was setting in, I asked a nice young man who ran a food concession if he knew where 2-7-21 AiAi building was.  Japanese people are all so helpful, but he didn't have a clue.  He looked all around and even went into someone's mailbox to see if he could find someone else's address, but no luck.  I thanked him profusely and walked back down the street and asked another man in another store.  Again, he tried hard.  He asked his friend, but neither one knew where 2-7-21 AiAi buidling was.  Well, I had to call Ken from the cell phone and let him know we could not find the G.D. AiAi building.  He was really not happy.  So I suggested that maybe I could stop one of the pedestrians on the street and give him the cell phone and ask Ken to ask in Japanese if he could help us.  I stopped one man and tried to ask him to talk to Ken over the telephone and he looked at me like I was a crazy person - or perhaps one of those people trying to get someone to do something stupid for Candid Camera.  Well that wasn't going to work.  And Ken was breathing rather heavily on the phone and Yumiko's ear still itched and I was having a heat flash.  So, we finally went into a travel agency and I asked the woman at the desk if by any chance she spoke English and she said yes, a little.  I asked her if she know were 2-7-21 AiAi building was.  She said no, but she would try to help.  She looked at Ken's map, then got on her computer and did a search.  Her office mate stepped into the conversation as well.  He went outside and came back in and said something to the woman.  She said I think we've found it and it is right next door.  And lo and behold there on that building that we had passed several times Yumiko read in Japanese characters "the AiAi Building."  I told Ken who was STILL on the cell phone that we found the building.  We then thanked our travel agency angels profusely and rushed up in the elevator.  Luckily, our dear ear doctor was only on number 47.   Tonight as I write this, Yumiko no longer has an itchy ear.
Posted by Kitty Riley Kono at 6:59 AM